Greetings!
I had a task to develop in a very short time a rather “heavy” GUI for one industrial system. I ended up choosing between two 10" HMIs - Nextion and Stone. Installed applications from both brands and fell into confusion.
On the one hand, Nextion is a little cheaper (and what is more important - with a much shorter delivery time), it has good documentation, an understandable and quite convenient editor. And at first glance, it is sufficient to implement the desired GUI. However, after reading dozens of topics yesterday and today on this forum, I began to have some doubts that the power of his controller would be enough for a smooth GUI to the required extent. Moreover, many examples of the disgusting attitude of Nextion to users described here…
On the other hand, according to the declared specifications, Stone is more suitable for industrial applications - they have a larger supply voltage range, a wider temperature range, there are versions with an RS-485 interface, the processor costs much more serious. And judging by the Stone, the editor is provided with more widgets with more properties. It will definitely cope with any animation. But two points are very embarrassing: the unavailability of the editor for free download and the wild buggy of the new version of this program, which I somehow found.
And my question is: maybe someone has worked with HMI from both manufacturers and can give an objective comparative description? And is their new editor really unsuitable for normal use, or did I get a bad version? The version number I found is 0.1.2-220110.
Thanks in advance

First, I’d not at all say that there is a disgusting attitude by Nextion towards their customers. There have been some “differences” between one or more moderators of the official Nextion forums and a few people, especially people who made public attempts to reverse-engineer things which are presumably considered intellectual property by Nextion. These few people were apparently banned from there and made their anger public here. Thus, one should not generalize or overrate this. It’s like everywhere: one unsatisfied customer is much louder then hundreds of satisfied ones.

Basically, one can say that there are use cases where Nextion would be the first choice, and others where Stone has probably advantages over Nextion despite of the higher price, the much less intuitive dev environment, and the ways more finicky upload/update procedure. But without knowing the detailed specifications of your project, it’s difficult to give a competent advice.

The criteria which you enumerate like more widgets or the RS-485 interface are not sufficient to judge. It’s not the sheer number of widgets which is important but the presence of the ones you really need for your project. If you don’t need the 999 other ones, why bother? And if a RS485 interface is really needed, a $0.88 MAX485 IC is quickly added to your project.

If I were you, I’d not buy either for the moment. I’d download and install the Nextion Editor and develop my project only with the help of its integrated Simulator/Debugger. When this is working as you expect, buy a Nextion for real-life prototyping and tests.
And if you need help, there is this forum, then the official Nextion forum, and they have about 100 blog posts on their website with in-depth explanations, code snippets, and example projects - all things you haven’t with Stone.

I agree and disagree with what @Fjodor and want to provide you a few more details - especially for the Nextion side since I don‘t know Stone too well. Click the sections to expand them.

It’s like everywhere: one unsatisfied customer is much louder then hundreds of satisfied ones.

I understand this very well, and if only a couple of people complained about them here, I would not worry. But I’ve seen messages here from other people who found themselves banned from the Nextion forum for no apparent reason, most likely simply because they became members of this forum. And this is too much, a serious company should not even come close to behaving like that.

It’s not the sheer number of widgets which is important but the presence of the ones you really need for your project. If you don’t need the 999 other ones, why bother? And if a RS485 interface is really needed, a $0.88 MAX485 IC is quickly added to your project.

Yes, several analogues of MAX485 will be in the project in any case, and adding another one is not difficult, but still, if it is already on the display, it’s +1 point in favor of this display

Regarding unnecessary widgets - if they are not needed at the moment, this does not mean that they will not be needed if suddenly the customer says “I don’t like this place, can I remake it differently?”. Or when this control system is asked to be adapted for other equipment. It’s always better to have more potential

If I were you, I’d not buy either for the moment. I’d download and install the Nextion Editor and develop my project only with the help of its integrated Simulator/Debugger. When this is working as you expect, buy a Nextion for real-life prototyping and tests.

Well, two Nextion NX1060P101-011R displays are already on order and should arrive within a few days. One will immediately go to temperature tests - it must remain in working condition after several dozen cycles of cooling to -30 ° and heating to 80 °. I’ve also been fiddling with the program from Nextion for several days now and a small demo project is already running in the simulator. But I would also like to have a couple of Stone displays just for objective comparison. The choice must be made as early as possible, as the deadlines are running out (as usual :)). But for the time being, the unsuitability of their program stops me, which is why I asked a question about it. Maybe someone works with Stone displays and can share the normal version of their program version 0.1.2 or higher. Although in any case, the project will initially be developed on Nextion, even if I come to the decision to use Stone, because Stone will be delivered for more than a month. All the same, design development will be the most time-consuming, and transferring the design, if necessary, to another HMI of the same size is fast.

And if you need help, there is this forum, then the official Nextion forum, and they have about 100 blog posts

I looked through the blog posts - yes, there are quite interesting ones. But their formum looks dead without registration - only three topics and 4 responses to the entire forum. And I could not register - when I try to register, I get a message that the recaptcha was not completed, although it is not on the registration page at all.

Nextion is simple. Basic functionality that‘s pretty easy to use.

As I understand it, Stone is just as simple and even simpler - for example, I did not find the ability to use built-in scripts in it

Don‘t forget that Nextion‘s value lies in the fact that you can develop a good UI quickly.

And again, Stone makes designing just as easy and fast. There is parity between Nextion and Stone. But here, for example, Stone has the ability to rotate images, while Nextion does not. This is what I have noticed, because this feature will probably be useful to me.
In general, I don’t plan on complex scripting in the display, because the interface will be very dependent on the external conditions that the central MCU handles. For example, on the main screen there will be many small elements, whose color and style will depend on the state of real executive devices. And when you click on one of these elements, it will not be possible to immediately change its image to another status until the central MCU receives confirmation that the device has really switched to another state. So the HMI in this case will basically just be a display and a touch input device with simple scenarios like moving to another page, entering text or numbers, and so on. And of course, store all the images, texts, animations, sounds

Maybe you can contact them, too, to get a bit of help with your editor issues.

I wrote on their official forum, but have not received a response yet. And there I saw a lot of official answers in the spirit of “Buy our display and we will give you a link to the program.” This absolutely does not suit me. I want to see and test the program before I decide to buy a display.

Finally, you may also consider a „dumb“ screen together with a powerful library such as lvgl.

In general, this is my usual approach, but in this case it is excluded due to the timing. I will not have time to design and manufacture a board, write firmware, prepare a GUI design specific for this use. So only HMI, the only question is which one

Today I received a link from Stone to an updated version of the designer, and although the simulation does not work in it, the program is already quite usable. So the decision was made to start developing GUI design on Nextion , which I should receive in the next few days, and order Stone , which will arrive in a month and a half. And after receiving it, compare both displays, making the final choice in favor of one of them

Thanks to everyone for their replies

The only thing is that the animation slows down a little (transparent, almost on the whole screen) and a rather slow reaction to touching the screen. But in general, everything is very good. The LCD itself seems to be IPS - colors and brightness are not distorted at any angle up to almost 90 °. Downloading via UART at a speed of 921600 kbps is tolerable in terms of speed

And the screen brightness is very high, even too high for the room, in my opinion

When the backlight brightness is reduced to 60-70%, the brightness becomes quite normal for the room.
Now I just noticed that in the program it is impossible to adjust the reaction to a long press. I had to invent a script for processing a long press - a button that increases the number in a numeric field should start automatically increasing the number 5 times per second a second after the start of pressing the button. 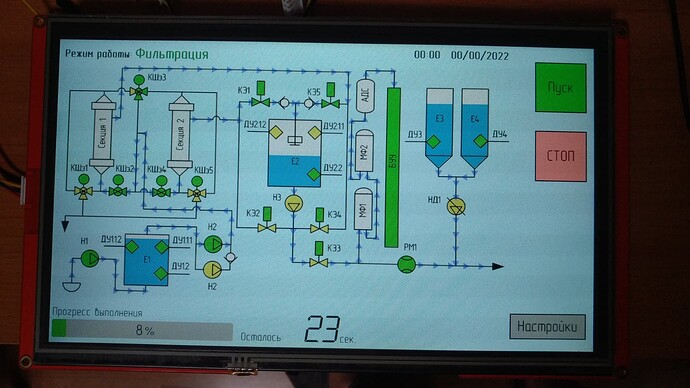 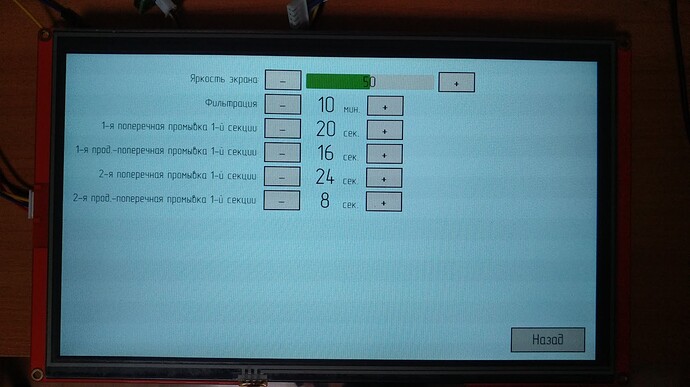