Nextion and TJC - what's the difference?

If you’re a Nextion user you might have run across the name TJC. TJC is Taojin Chi, a Chinese company that is somehow affiliated with Nextion and which Nextion generally denies any involvement with.

This is pretty hard to swallow, because their products look a little bit alike. For example, check out the 2.4" devices from each vendor: 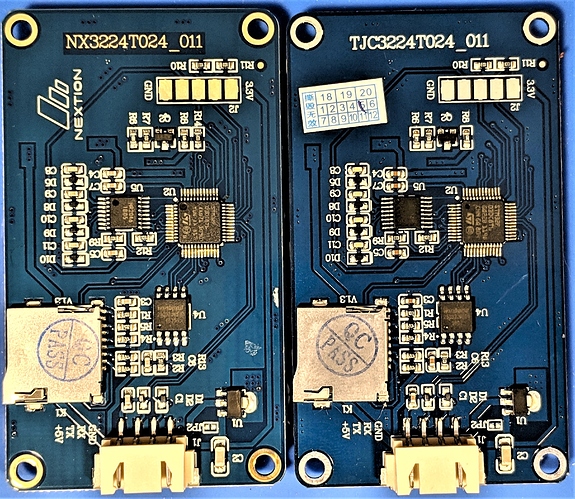 Now take a look at the editing software offered by each organization:

Apart from one being in Chinese and one in English, these too are identical. All features, buttons, etc are the same. When pressed, the Nextion support crew will tacitly acknowledge that TJC is the same product, but is supposed to only be sold in mainland China. TJC panels typically sell for less than half the price of the equivalent Nextion panel. Anyone selling TJC outside of mainland China is pretty quickly shutdown, presumably by the Nextion team to protect their profit margins.

The challenge with this is that the source (HMI) and compiled (TFT) files for each device are nearly identical but region-locked, so you cannot use a Nextion HMI in the TJC editor and vice versa, nor can you flash a Nextion TFT to a TJC panel, etc. After some basic investigation this appears to be due to security measures enabled on the STM32 processor which prevents simple hardware attacks from allowing the translation.

There have been tools created which tweaked the HMI or TFT files to allow cross-compatibility, but those tools no longer work on recent firmware releases. This is an ongoing area of research, which is explicitly protected in the US by interoperability exceptions outlined in the Digital Millennium Copyright Act (DMCA) under 17 U.S. Code § Section 1201 subsection (F) paragraph (1).

So that’s the deal - TJC is the Chinese Nextion, (officially) sold only in China, and the tools for programming it are only offered in Chinese language. The Nextion folks freak out whenever anyone brings it up, because they are busy collecting 100% extra $$$ whenever they can sell you a Nextion LCD instead of a TJC LCD.

So @zombu2 pointed out one interesting difference: 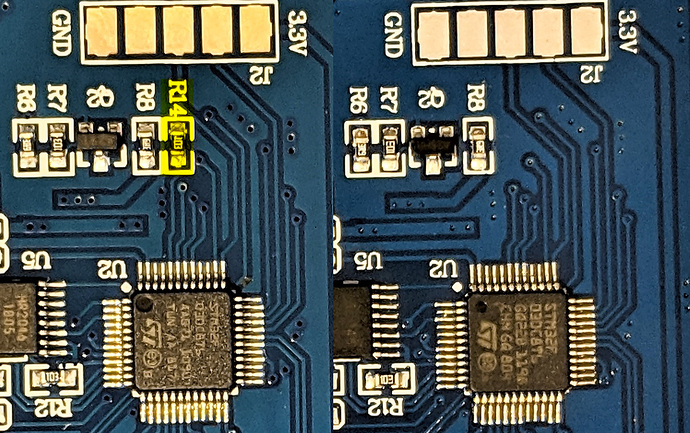 image.jpg1323×831 570 KB
Again that’s the Nextion on the left, TJC on the right. Highlighted in yellow on the Nextion is an additional 10k resistor connected to what appears to be the BOOT0 pin on the STM32: 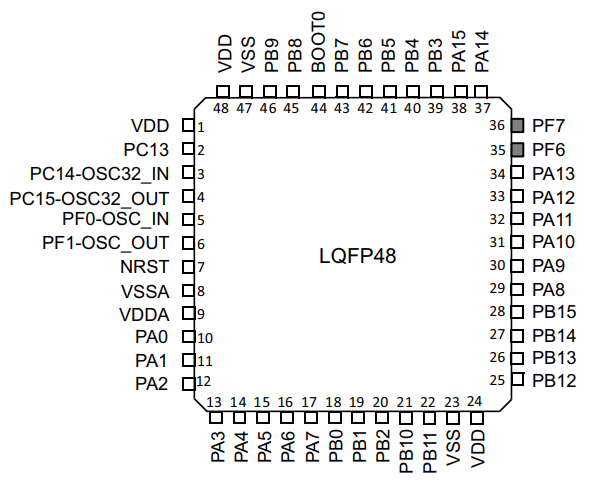 More on that over here.

I ordered what i thought was a ITEAD Nextion 2.4, as that is what was displayed in the pictures. This is what i got. Note the R14 on this board. 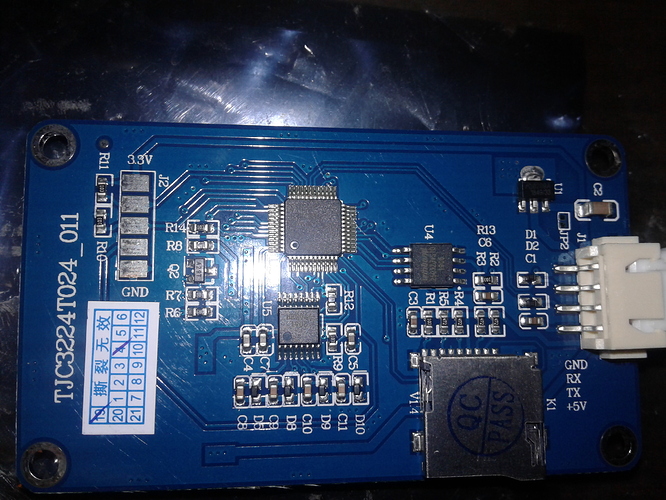 That’s happened to me as well. That’s how I found out about TJC in the first place 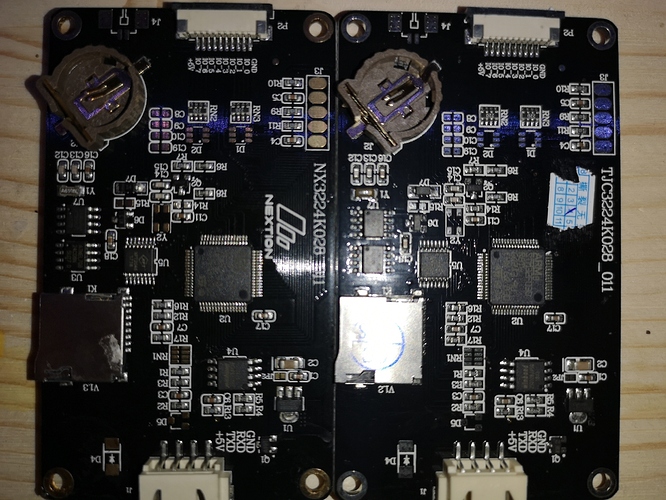 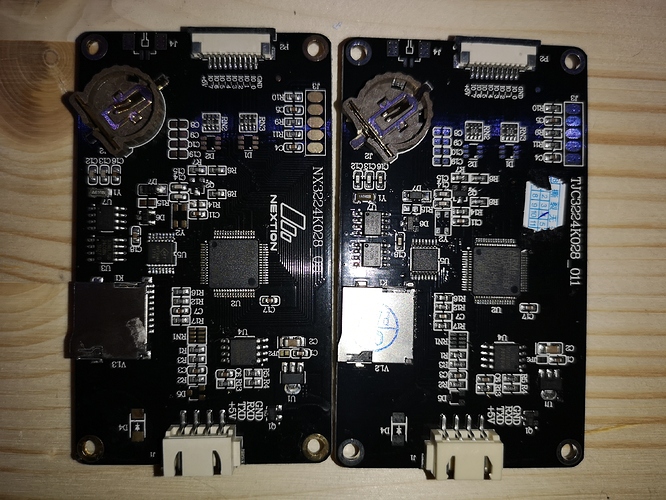 R14 on Nextion is there. not @ picture

they cannot deny it. because when we look at the file “USART HMI.exe” we can see that both programs are made by the same developer.

To explain the most logical reason, TJC (tjc1688 / Taojingchi) are the manufacturers of all the products and the Software. if you reverse their IL code software you can see there is a 1 bool check for english / chinese this also changes to nextions logo etc. the orignal software is in chinese and alpha releases are released long before english versions are available for nextion (Hence Chinese software writer)

What would it take to arrange with TJC for a ‘rebranded’ product to compete with the Nextion display? Just ink a deal with TJC as a ‘partner’ and market/sell to the US/UK markets…just like Nextion. Competition is good and considering how difficult and disgusting it is to work with the Nextion team, someone could run them over rather easily.

If you want to try TJC panel. You can see the website www.google.com. The only bad thing for TJC panel is the software only have Chinese version. But it is not expensive to find someone work on the software based on nextion version. So if someone has the english version, it is very easy to move to TJC panel.

Can you explain a little about the service you’re claiming to offer? If it’s legit them I’m inclined to allow it, but the website doesn’t say anything and this post feels spammy.

I began use TJC panle on my products about 4 years ago when I work in China. The quality is good. When working in the US after I moved to the US 3 years ago, I found that the HMI panel is so expensive here. It is not fare for the company who develop products using that kind of HMI panel. So I talked with TJC manufacutre, they said they can not provide the English version of software. So I decided to set up a company to help the companies here who want use the TJC panel. If you have nextion version software, we can redesign it to TJC version. If you have idea, we can design the software for TJC for you. For the design, we need a detail GUI design. By the way, I just start the business, so it is not so clear for how to cooperate with customers. It will be better and better.

Meanwhile… the rest of us use the English cracked version of the TJC USART editor.

Where might we find the latest version of the TJC “English Edition” Editor?

Found the download for the Chinese language 1.60.2. Then switched it to English. Not hard to do, no ‘patching’ required.

That’s a huge step in advance ! Would you mind sharing the “trick” or do you rather plan doing a business from it?

The only ones making money of locking USART to Chinese are the Nextion folks.
Anyone with knowledge of .net can fix the language.

out of interest if the resistor altered and the nextion bricked recovery file used on a TJC, will it come back to a nextion screen or is microcontroller locked and would need undervolting etc
Similarly reading a nextion chip and flashing a TJC board with a programmer?

Undervoltage or brown-out risks to image your Nextion physically.

And after looking deeper into it, the published fix is not useable in general for whatever bricked display, but just those where there is a conflict between the older firmware (<= S61) and a newer tft file, built with editor >=0.59.