FYI.
You should see the prompt when the start the Editor, but new Nextion Editor version available.

(Items marked with * are for Intelligent Series only)"

That was actually a bug I reported on their forums a few months ago. Except for some comments towards “too stupid to use the thing the way it’s intended” Patrick was quite helpful - offering more support than I expected or asked for. Aaaand then someone wrote my username in the UNUF discord and I’ve been banned

Anyways, the bug was that if you hide a component with vis it would fill the area with the compile-time color of the underlying object. If you change f.ex. the page background color from white to black, you’d always get a white rectangle at the place of the hidden component - very annoying if your HMI app includes a dark mode like mine.

Another nice change is that they finally updated the bootloader colors from red on white to light gray on black. Even added a nice progress bar. Buuut… after the upload is done you still get a red/white update successful screen

Anyone else having issues when attempting update?

It keeps nagging, reminding of an update 1.62.1 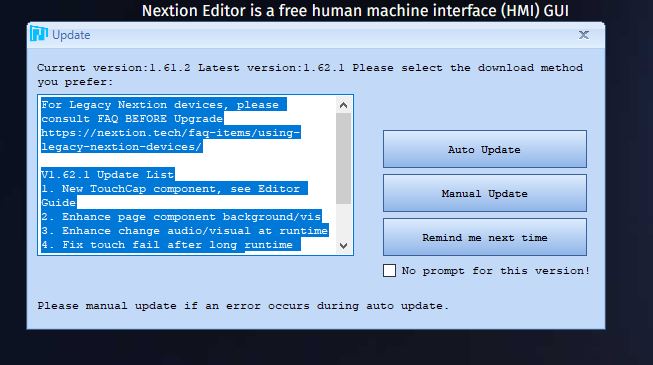 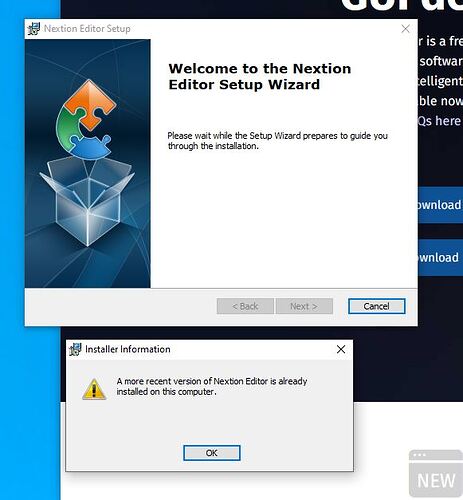 Now you’re [incorrectly] telling me this latest update isn’t as recent as what I already have?

Another Nextion disaster, for something that should be quite straightforward.

What’s the help line number in Canada we can telephone ?

Run the same latest 1.62.1 setup.exe file downloaded that failed to install as above.

Bad news for v1.62.1. I just compiled my project with the new version and it’s become unusable. Framerate has severely dropped; around 50% from a first view. Similarly, page loading time pretty much doubled from 1 to 2 seconds.
Maybe even worse, the serial coms are completely hit and miss. Half of the commands fail. Either no response at all from Nextion, or 0x1a (invalid variable), or 0x00 (instruction failed). I can’t even update the firmware with the upload function from the editor because it doesn’t even connect 9/10 times. And the one other time it just gets stuck at 1% - probably because Nextion doesn’t acknowledge. Honestly, at that point I couldn’t be bothered investigating it.

I haven’t done any precise benchmark tests yet, so no “hard facts” I could provide, but the difference is obvious enough without.

Can anyone confirm those observations?

Ouch, that doesn’t absolutely not sound good. Will try to reproduce in the next days and write back.

I did program a NX4832T035 (3.5" basic) two days ago with v1.62.1 and nothing unusual observed here.
The HMI worked and communicated with the MCU just fine, with no inkling there was anything different.

Perhaps what you are seeing is HMI variant dependent?

I’m currently updating another project that uses Enhanced HMIs of various sizes.
Will report if anything unusual is found.

Thanks for the feedback. I forgot to mention but it actually did not start right at the beginning. It worked fine for a couple uploads and then suddenly it didn’t anymore. In retrospective I can’t tell anymore what I did before the issues started. Mostly just playing around, testing stuff for my application. I do remember that I aborted some of the uploads; which is probably the only ‘abnormal’ thing.
I also reported the issue to Nextion and so far it looks like they can’t reproduce it either.

All of this looks like it was something faulty on my side but I honestly don’t know where that would come from… I can go back and forth between v1.61.1 and v1.62.1, consistently getting perfect results with the first one and crap results with the latter one - while not changing anything else to the setup.
Unfortunately I don’t have a second screen to test.

Edit: Here’s the link to the specific HMI file I used for testing (and the source code as text): Syntherrupter/Syntherrupter_Nextion at v4.1.3 · MMMZZZZ/Syntherrupter · GitHub

Issue solved. It was a power issue, not a firmware issue.

My device (microcontroller plus Nextion) is powered by my notebooks USB3 port. I don’t know if it’s capable of 1A, 1.5A or more but it is the “charging” port for charging phones, etc and certainly fulfills the minimum requirement of 500mA. I’m using a thick, good quality USB cable. I haven’t cut it open but it’s certainly not a thin cheapo one.

Although this setup should be good enough, it’s not. Measuring the 3.3V and 5V rail on the Nextion PCB itself I can see a high ripple caused by the background LED PWM. The lower peak on the 5V rail goes as low as 3.7V, which the 3.3V reg can’t compensate anymore, making the 3.3V line sag to 2.6V for a short time.
These results are visible on the attached scope image, C1 (yellow) measures the 3.3V rail, C3 the 5V rail. The white traces are explained below.

When increasing the backlight intensity to 100% everything is okay, and indeed, the application immediately runs faster again. Very weird how you can switch between fast and slow while it’s running. At 100% backlight the 5V line sits at 4.5V which is well in spec (USB hardware - Wikipedia ).

The 100% backlight test proves that my USB port, the cable, the connections, … is well capable of handling the full LED current. However, the transient response is bad - likely caused by cable inductance. This cannot really be solved by a better cable, since inductance isn’t much dependent on the wire diameter. With 1m the cable isn’t exceptionally long, but rather a pretty common size.

As every PCB designer probably knows, the solution is local decoupling. Therefore I soldered a 220uF 63V low-ESR capacitor to the connector on the Nextion screen itself. Sure enough the voltage rating is way too high but I didn’t have anything else at hand.
Result: The excessive dips are gone. Except for noise the 5V rail stays above 4.45V which makes it USB compliant. The 3.3V line is perfectly stable. All issues are gone no matter the Nextion firmware version.
These observations are again visible in the scope screenshot. R1 and R3 show the 3.3 and 5V rail.

I’m not the first one who added a decoupling capacitor*. Apparently it also helps a lot with reducing noise that the Nextion screen injects into the rest of the system - which totally makes sense to me after seeing these scope shots. Possibly much less than 220uF would already be sufficient. This is not a big BOM item but it would certainly make the screen more reliable - which for industrial clients is probably well worth the extra 0.2$ costs.
*I can’t find that post right now… Maybe one of you remembers it because I think it was here.

I also measured the 3.3V rail on my microcontroller board (Tiva TM4C1294XL) and it doesn’t experience any sagging. Apparently they do use a proper LDO regultator. Price difference between LDO and standard 3.3V reg shouldn’t be significant, making this a low hanging fruit for more robustness.

Finally, I still wonder what v1.62.1 has to do with all this. Why did it suddenly start to become picky about that voltage dip or why wasn’t any previous version sensitive to this. I don’t know. Also, I’d have expected crashes and similar things, but not that its execution speed drops by 50%. Did v1.62.1 potentially include some kind of power management? If a brown out is detected, reduce CPU clock? That would be fancy, but rather unlikely I think.
Anyways, I don’t think v1.62.1 is the one to blame here. Handling voltage drops like this isn’t the job of a firmware IMO. 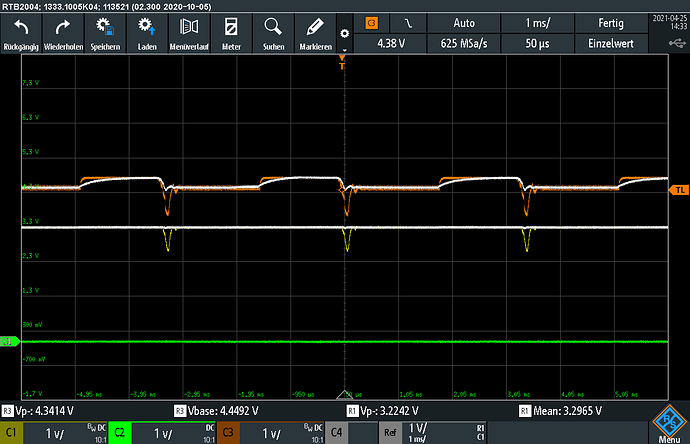