If I want to use the wifi or Bluetooth function what can I use to replace this function?
Is there any series with an Ethernet port or something?
just like this 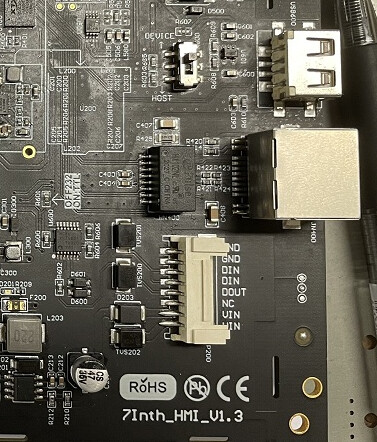 No only serial. An off the shelf solution would be a HLK RM04 which is a dual serial port to tcpip , router and access point .

Does any series have a wifi/bluetooth module?

No. Check out the datasheets for a complete list of features (Example).

None of the Nextions is equipped with wireless technologies. The reason is, after what the Nextion forum admins stated, that this would increase the retail price for everybody but only be useful for a minority of users. Sounds rather reasonable to me.

Out of that, there are so many ESP32 or ESP8266 based and similar dev boards out there, sometimes < 1$, so that Wi-Fi and/or Bluetooth can quickly and easily be added by those who need it.

Ok I understand, I will buy some boards of the ESP series.