Behind closed doors most of the files and tools from Nextion have been reverse engineered. Some time ago we decided to make most of those efforts public. This includes a tool that allows you to convert TFT files from Nextion to TJC and vice versa!
Some parts are still pretty experimental and not very actively maintained but nonetheless I think this provides lots of value for other people.

Edit: Since the question will probably come anyways: no, we won’t make the tool public that allows converting HMI files. However, the Nextion2Text tool indirectly documents a lot of the file structure and the CRC algorithms involved are the same as in the TFT file (Python code here). 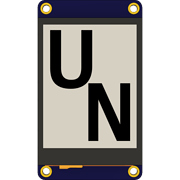 Three years ago I peek a TJC announced as Nextion. At that time I knew nothing about NX & TJC and never claimed my money back. There was, later, some try to hack the editor or use it in Chinese but no progress.

So I used the Nextion one I bought directly to Itead and do some prototypes. One of them finally reached enough maturity to be the clock plus weather that rest in my entrance until today.

But, due to this post and some help from nice people, today at last I was to be able to flash the same project to the TJC one, liberating the Nextion to further learning having fun making projects…

Thanks again, Max, for the UNUF/nxt-doc.