I’ve recently bought NX1060P101-011C which is a 10" capacitive touch model from Nextion for a bit unusual purpose - I wanted to make a DJ controller with it. I went basically for biggest and their best model expecting it to meet my demands. Unfortunately, I’ve quickly learned that this will not be possible due to very high (at least from my perspective) response time. Is there something that could be done about this? For the record, I have some 5" resistive touchscreen laying around which seems to have near instantaneous response once you touch the display - but not so with Nextion. I’ve tried to remedy it by increasing the baud rate to the max and instead of sending component IDs I’ve tried to make each component just output single byte value on press/release (printh ) but the response is still just so slow. Do they normally improve these things with firmware updates? Are there any alternative firmwares I could use? If not, well, I’ve lost bit of money and time, but, if nothing can be done about this maybe someone could recommend me some other touchscreen model about the same size (7" would be minimum) with decent documentation and fast response.

EDIT: For the record, I am not using Nextion libraries, nor did I use any code whatsoever - my test was simply to monitor the UART output through some serial monitor.

A similar problem has recently been discussed and resolved in the official forums. This might perhaps help you?
https://nextion.tech/forums/topic/problem-with-nextion-inteligent/

Viewable by only those who haven’t been blocked. 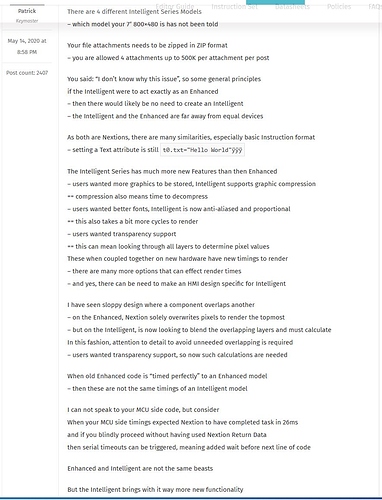 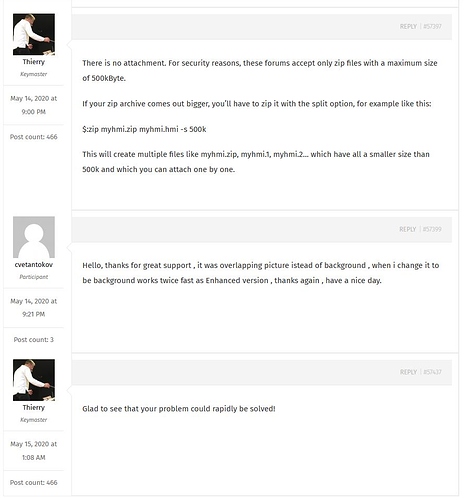 it was overlapping picture instead of background , when i change it to be background works twice fast as Enhanced version

Amazingly that did solve the issue. Thanks!

Sometimes, the “official” forum is not so bad

a meeting or medium where ideas and views on a particular issue can be exchanged.

By it’s very definition the nextion guys aren’t even running a forum as they don’t tolerate anything that doesn’t fit their views. So, I think the quotes should be around “forum” instead.

Hi All, I am new to HMI, can someone tell me how to do this? Thankyou in advance